I pray for this country, for the good guys, for our true President, President Trump, for the military and for the upcoming upheaval.  I pray for the people who don't know what's coming because I believe they are going to be in for a shock.  I hope they take it well.

When God shows me the same message 2 times in 12 hours, I believe it's a message worth sharing. Sasha Stone quickly summarizes the speech Krushchev gave in 1959 in the video I watched last night. Then, a friend sent me a print out of the famous 1959 speech.

I also watch for news of anything new. Late last night I came across this video on the #unrig channel on BitChute by Robert David Steele – a former CIA agent who puts out great info. He keeps his videos short and to the point where some videos drag on an hour or more and have very little info – he packs his videos with relevant content, great guests and gets to the subject matter quickly and concisely.

The above video is a very short discussion a couple of topics -each of the guests is usually given 3-5 minutes. Charlie has some great info that I will go over later in this blog.

I watched the above video last night before I reviewed the documents shared at the very beginning of the video — which I will get into in more depth below.

Sasha does a wonderful summary of the Krushchev speech of 1959 . I had heard rumor of this speech a few times in my life. I had even heard the part Sasha mentions of him slamming his shoe down which is written in any reference I can find to this speech.  If anyone knows the cultural significance of the shoe slamming if there is one, I am curious.

Then, this morning, a friend I had been praying with last night – I don't think we spoke about this – and it was after I got home that I watched this video — she sent me the picture below. 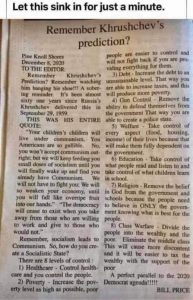 Remember Khrushchev's Prediction? Remember watching him banging his shoe!!! A sobering reminder.  It's been almost sixty years since Russia's Khrushchev delived this in September 29, 1959.

THIS WAS HIS ENTIRE QUOTE:

“Your children’s children will live under communism, You Americans are so gullible. No, you won’t accept communism outright; but we will keep feeding you small doses of socialism until you will finally wake up and find you already have Communism. We will not have to fight you; We will so weaken your economy, until you will fall like overripe fruit into our hands. The democracy will cease to exist when you take away from those who are willing to work and give to those who would not.”

Remember, Socialism leads to Communism. So, how do you create a Socialistic State ?

There are 8 levels of control:
1) Healthcare – Control healthcare and you control the people.
2) Poverty – Increase the poverty level as high as possible, poor people are easier to control and will not fight back if you are providing everything for them.
3) Debt – Increase the debt to an unsustainable level. That way you are able to increase taxes, and this will produce more poverty.
4) Gun Control – Remove the ability to defend themselves from the government. That way you are able to create a police state.
5) Welfare – Take control of every aspect (food, housing, income) of their lives because that will make them fully dependent on the government.
6) Education – Take control of what people read and listen to and take control of what children learn in school.
7) Religion – Remove the belief in God from the Government and schools because the people need to believe in ONLY the
government knowing what is best for the people.
8) Class Warfare – Divide the people into the wealthy and the poor. Eliminate the middle class. This will cause more discontent and it will be easier to tax the wealthy with the support of the poor

A perfect parallel to the 2020 Democrat Agenda!!!!

To get back to the 2 topics of discussion:

Sasha says something that should be obvious when looking at parts of “the plan.” The good guys cannot publish dates and timelines because they would be informing their enemies of their plan. There are double disinformation loops everywhere.  Use discernment. Don't get hung up on dates.  Know that the plan has been in place.  The traps are set.

Everyone should be seeking the truth and trusting the plan and I will add that we should pray for good to win this war and peace on earth!

Charlie speaks next and he says he has known about this plan for 7 years – and if he knew about it 7 years ago it was planned long before. 10-20 years, maybe more.  8,000 people behind the scenes planning this.

He mentions Santa Surfer who has a channel I know about on BitChute and a website at BeachBroadcast.com She has done her research and the list of people who have been arrested includes:

The MSM news is reporting Jeff Bezos is stepping down from Amazon to pursue philanthropy.

Charlie says he has heard from 100's of Amazon employees leaving their position on February 12th [added by Robert- Friday before President's Day and that tracks with the timeline from Belgium] and they will be notified if they are needed to return. 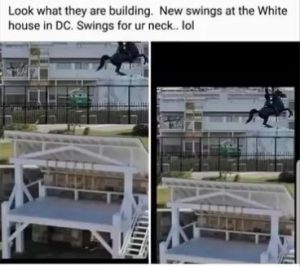 Charlie was sent this picture of Gallows outside the White House

Asks for anyone in Washington DC to send info as to whether this is real or not. Because of the fake inauguration and the pictures of the movie set in the Oval Office – we have to be careful what we believe.

Horrible info about underground bases children and the gruesome scenes from the freeing of women, children, etc. (Bath, England)

Simon says the gallows were dismantled (I remember someone saying there was a gallows up on Jan. 6th – so I wonder if this was the same one from that date)

What people are struggling with is – if these high profile people are being arrested – why are they not behind bars or on house arrest.  They are back in their jobs and in the public view (ie. Nancy Pelosi)

The people who are managing the operation are moving forward.  People want to know when this will happen and that will not be told to us.

Know: Good will triumph over evil.

Simon is concerned the Emergency Broadcast System(EBS) will only be in the US. The US will get the truth first.

Sasha adds that is because the “crown” and the “vatican” have fallen together against the US.

Robert says that if America gets its act together it will have a cascade effect across the globe.

Robert brings up that transgender and sexual perversion is being taught in school in Fairfax, VA. Asks the question is this the reason

Simon says the satanic is drawing out the good.  The more Biden screws up, the longer it takes to get him out because it is showing the world what a fool he is and that is good for the good guys.  He is being told Harris will take over mid February which may move the good guys a little faster. Good will always triumph over evil. Help each other. Ask yourself: what sounds truthful to me.

Charlie wraps up with: Trust the plan.  It's all a movie. Hunter Biden is head of the DEA and new covid tests swab your ass. How stupid does it have to get to see this is being done as pantomime to wake people up.

Robert: there is a computer that maps out the outcomes of war and as things happen it recalculates so carrying out the plan changes the future plan.

Sasha: we have been unconscious for thousands of years. Probably 13,000 years since the great flood, definitely 2,000 years since the time of Christ. Government is the ghoul, revealed for what it is.  The ember of wisdom is being shared. (he says much more – know that there is hope)

People are waking up.

Thisiswhereistand.com took notes while watching this video. This is not an exact transcript.

This next video was Update 2: Video on the 1st blog Robert references for the Four Amigos video (top of this page)

This video shows much more clarity — he zooms in!! — and many more videos showing something happening in Washington DC.  In the beginning of the video, the woman talking says this is from January 25th and reported on January 27th.  From what I can discover, this video was mirrored to BitChute on January 30th.  Still doing research on the origin of this video.

t.me/disclosurehub @scottbishop on Clapper
-look for part 2 of this video – he mentions at the end