I'm excited for this impeachment trial. It's our day in court.  President Trump can present a defense and we the people should be able to hear some version of the truth. Listen, I know there are two stories to every situation.  The world media is only giving one side and that is not good.

My question is – do the Democrats and RINO Republicans know what they are up against?  Did they open up pandora's box by letting Trump in to present a case?  A trial for a man who was not allowed to present hard evidence?  Are they ready for the trial of the century?  I do believe this will be an event like no other.

I am old enough and awake enough to remember many corrupt hearings when the people who were testifying were flat out lying.  I watched CSpan and other news broadcasts without opinion and propaganda like many others concerned about our nation.  We were lied to and jerked around like idiots who put up with dictators, cabal and drug dealers as our so called “leaders.” Our country has been abused and neglected for my whole life.

I am praying, this time, she wins.  We win.  The world wins.  The people of the world are set free.

The Marshall Report put out a great blog showing how the Insurrection Act could have been signed on January 6th.  From what I have heard, he set the stage for signing the Insurrection Act with the public announcement on Jan. 6, 2021 – but didn't actually sign the IA until January 9.  But who cares the exact date, right?

Sometime, before January 20th, the Insurrection Act was signed. So, guess who is in charge of our country… 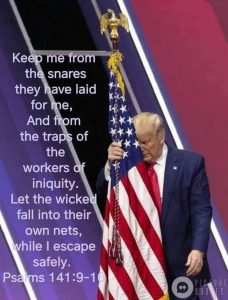 The Military has been in charge since before the fake inauguration of a fake president.

January 8th, the trial of my lifetime begins.  Let the truth come out.

Prayer for Safekeeping from Wickedness

A Psalm of David

Lord, I cry out to You;
Make haste to me!
Give ear to my voice when I cry out to You.
Let my prayer be set before You as incense,
The lifting up of my hands as the evening sacrifice.

Set a guard, O Lord, over my mouth;
Keep watch over the door of my lips.
Do not incline my heart to any evil thing,
To practice wicked works
With men who work iniquity;
And do not let me eat of their delicacies. 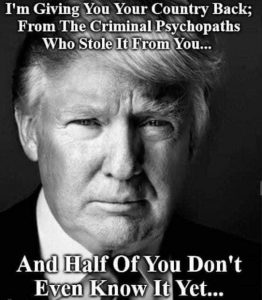 For still my prayer is against the deeds of the wicked.
Their judges are overthrown by the sides of the cliff,
And they hear my words, for they are sweet.
Our bones are scattered at the mouth of the grave,
As when one plows and breaks up the earth.

But my eyes are upon You, O Godthe Lord;
In You I take refuge;
Do not leave my soul destitute.
Keep me from the snares they have laid for me,
And from the traps of the workers of iniquity.
Let the wicked fall into their own nets,
While I escape safely.

The [DS] Is Projecting Their Crimes Onto Trump, Slings And Arrows, Boomerang Coming

Why Democrats are Pushing Impeachment