Starts with CNN clip – Cnn guest saying how beams of light are smiling or some propaganda about bye-din –
truly embarrassing. they are giddy.

5:00 Crowd size Washington DC is empty! No one went to this!

Here are 2 snapshots of today's installment and Trump's 2017 inauguration– both at the same time.
11 minutes
Boris Epshteyn talks about President Trump's exit speech at Joint Base Andrew when Melania spoke and 500 people were there to see him off. They lined the streets in Florida for his arrival.

Joe Byedin is not the most popular president ever. It's a scam. 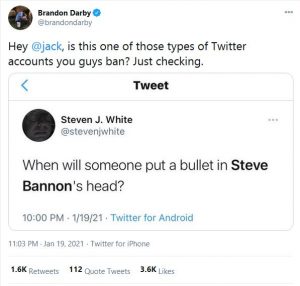 There is a tweet retweeted by Brandon Darby and it is still on twitter TODAY saying that we should put a bullet in Steve Bannon's brain. Things like that do not get taken down.

I found this retweet but not the original tweet dated 1/19/2021. The guy must have deleted it. When I searched @stevenjwhite bannon – there were over 25 tweets about Steve Bannon and many others that this guy seems to be obsessed with. Live your life, man. Leave Steve Bannon alone.

He gets no views online, no ratings on tv, no people coming to the ceremony but he got elected? No one believes he actually got the most votes of any president. Where are the voters?

I bet DJT has a bigger crowd in Palm Beach when he lands that JB has in DC. If people say this on social media they will get banned.

That's why the troops are there. They know they have a problem. The people did not vote this guy in. It's embarrassing for the country.

27 minutes
Steve Bannon – talks a little more about the tweet about him. Brandon retweeted it to @jack because the left can do or say anything while the right is persecuted for nothing. The left is suppressing the truth because they cannot handle the truth.

Joe B. did not get 80 million plus votes.

This is an abomination. This is a shame upon the American people.

It's not just about an empty field. It is about a fraud that we know happened and we will never stop investigating and putting out the truth.

“The first know crook inaugurated as president of the United States – why would anyone come?” Reads Hunter email where he says you don't have to give me 1/2 like “Pop” makes me give him. Byedin crime family and other crooks and criminals in attendance have been selling every office they are elected to.

There was a bomb scare at the Supreme Court a few minutes ago – how do you get a bomb into DC with 25,000 troops? Psyops.

Nullification project – the media and the establishment tried to nullify his presidency from the beginning. We are going to call attention to this lie, this charade. We are not going to let you get away with this.

Lobbyists are there, republican traitors are there, McConnell and Biden have a lot in common. Where are the people? No one cares. People did not vote for this man. Some did but there is very little public support.

This is a joke and we are going to expose all your lies. Joe's arms embracing the nation. Get focused. Spread the word. This is a fake.

They are going to try to blame this on covid. This is blatant. They stole this election. China is laughing at us. Good riddance Trump is China's call. They are emboldened because of this farce.

The left has a movement and it is philosophically based on hate. No one shows Biden because no one hates him. They don't get enthusiastic about a candidate — all they know is hate. They loot, riot, cause property damage, severely injure and kill people including police. They don't wake up happy and supporting anyone!

Let Our Love Embrace You

When the left turned the nullification project on us we debated and presented proof and facts going through line by line and proving what was being said to be false. When we accuse them of cheating they shut the speech down. 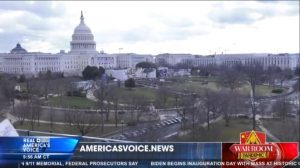 Thisiswhereistand.com took notes while watching this video. This is not an exact transcript. When something is (in parenthesis) it is something that was not said and was added by us.
0 0 vote
Article Rating
Subscribe
Login
0 Comments
Inline Feedbacks
View all comments