Simon: That goes to a debate I was having this morning. These people are not stupid yet they still turned up. Either they've got nowhere else to go or maybe if the piece of cheese is big enough on the trap then they've got to walk into it.  I've got to agree.  There was no excitement and they were looking over their shoulders every 5 minutes.

Charlie: this is something that was said to me just now.  The farewell speech had gold trimmed flags. He is transferring administration out of the District of Columbia where the corporation was formed. And it will gain power by Biden tomorrow. Will be considered a hostile relationship between the state of an occupied territory and the occupied power.  Which is why they have all the troops there.  11.3 following that by his executive order of 2018 of ceasing of assets. Well DC has been fenced in so it is now regarded as a foreign territory with foreign assets. This is called foreign interference in our election. They can cease anything and everything from the candidate to certify or was part of the certifying of a fraudulent election.

This will all go out into public view.  We will have no communication from the President because the military is now in control due to the insurrection act.

Biden will be virtually inaugurated to lead this foreign entity and the US Marshalls will hold tribunals in the capitol which is why the tents are set up as a makeshift prison.

Trump will be sworn in as the 19th president of the 1776 US on March 4th hence the flags now in the capitol.

Charlie: I received that inauguration at 7am Spanish time which is 1am EST – 10 hours before it happened–  it was pre-recorded.

This is all pantomime.

Remain calm.  The military are in control.  Pete Gaynor & Christopher Miller are the top 2 in charge. 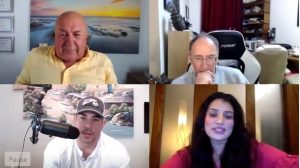 She escaped the tyranny of lock-down in the UK.  She just arrived in Dubai.

Simon: I'm not surprised General Flynn is not taking a part because if he is offered the VP position the last thing he needs is recent military involvement.

Charlie: From what I understood, from people he is talking to, Mike Pompeo will be VP. General Flynn will be traveling around the world to help each country move into Gesara. A diplomat.

“I wanted him to be Attorney General because that would be karma.” ~Charlie

Charlie: I've said before. I know the destination.  I just didn't know the journey.  Trump has taken us down some bumpy roads.

David: I've got major hate mail. I knew you were a fraud.

What did I do? everyone laughing

We have not seen the end yet.  We haven't seen the start.

There are all kinds theories being shared.  Some with details, guesses.

Most Trump supporters are feeling like he failed them.

Trump is in DC. 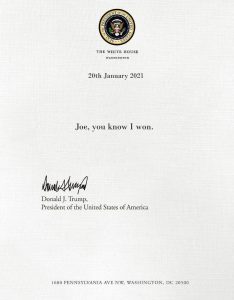 Let them believe they have won.

People will learn and grow from this.  People are angry.  They feel betrayed.  They will be okay.

People will swear because they saw the inauguration on TV that it is real.  It is a sham.

Simon: The FBI told Biden the the threat in DC is so strong that they agreed to keep 6,500 troops in town for a whole week. 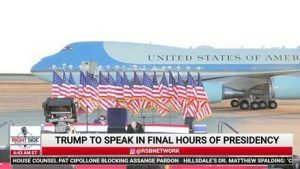 Mentions many events around the world.  Just one is Angela Merkel stepping down.

Simon: Asks about money taken from the Vatican

Charlie: 34 quadrillion taken in cash, gold and artifacts.  When Donald Trump took power Fort Knox was empty. It is no longer empty.

Simon: This bought the Italian government freedom.  Is that right?

Charlie: Yes. The Italian government did a deal with Trump.  There have been a number of deals done.  You have to understand Trump is a business man.

The Chinese have been cheating the US for years.  No more with Trump.

David: People want arrests.  They want it done. They wanted it at the inauguration and nothing happened, When do you think things will happen?

Charlie: Simon and I are just sitting back and waiting for things to happen because they will happen on God's time.

Simon: Melania put out a message on Telegram that there was a delay in the plan and that is why things did not go down at the ceremony.  No other details.

Simon: This deep state is so entwined, every step affects the next so it is complicated.   There is no timeline – and if there was they could not tell everyone because that would be informing the enemies.

Flag came down at the White House.  Symolizes military control.

George Bush, Sr was “timberwolf” and he was involved in JFK assination and 5 attempts on Reagan's life.

It's going to be a fun week! 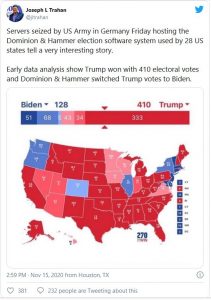 Tiana: Don't cling to timelines and dates because everything changes daily.Question: Why are is Bill Gates buying up massive amounts of land across 18 states?  Jeff Bezos is buying land too.

Simon: There is no value in bits of paper.

The Emergency Broadcast System (EBS) will explain what they have been up to.

The team behind Trump is about 8,000 people who are laser focused on the plan.  It is incredibly well thought out and they are doing everything according to plan with no mistakes.

OAN said that Biden was in Federal custody.  Retracted it.

Simon: The real America is on the verge of telling California we don't want you. If these governors and mayors of democratic cities put up a resistance there will be military action.

75% of the votes went to Trump.  He won California and Hawaii.  The riots over the past year pushed votes to Trump.

Thisiswhereistand.com took notes while watching this video. This is not an exact transcript. When something is (in parenthesis) it is something that was not said and was added by us.